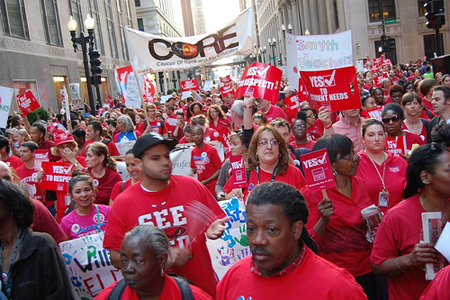 A discussion featuring a presentation by a Chicago Teachers Union member 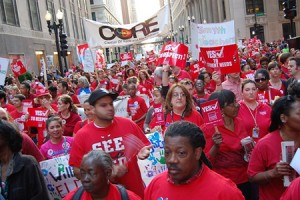 Public schools, teachers and their unions are under attack throughout the country.

The drive to privatize our public schools and strip away teacher protections is only accelerating.

In Chicago, Mayor Rahm Emanuel canceled a promised 4% pay raise to Chicago teachers and proposed lengthening the school day by 20% with only a 2% raise.  In addition, Emanuel proposes implementing a merit pay system for teachers–a similar system in Baltimore has led to 60% of teachers receiving unsatisfactory ratings.  In response, the Chicago Teachers Union (CTU) has refused to back down and has shown the power of solidarity, holding large rallies and forging alliances with community members.  The CTU is demanding smaller class sizes, fair pay and a diverse and fulfilling curriculum for Chicago students.  This spring, 90% of all CTU members voted to authorize a strike.  98% of those voting authorized a strike.

The CTU’s campaign has met with some initial success.  Emanuel recently agreed to hire almost 500 teachers, mostly arts, PE and enrichment teachers.  These teachers will be hired from a pool of laid-off, experienced teachers.  The result is that a longer school day will not force teachers to work longer and harder with no compensation.

While this victory is inspiring, the CTU’s strike preparations continue, as there has been no agreement on teacher pay, class sizes, merit pay and other important issues.  It is urgent that teachers, parents and community members show our solidarity with CTU.  We also have a lot to learn from CTU’s struggle.

Come hear a presentation by a CTU member and help organize solidarity for the Chicago teachers here in NYC!

Contact nycctusolidarity@gmail.com to help organize the event or to co-sponsor