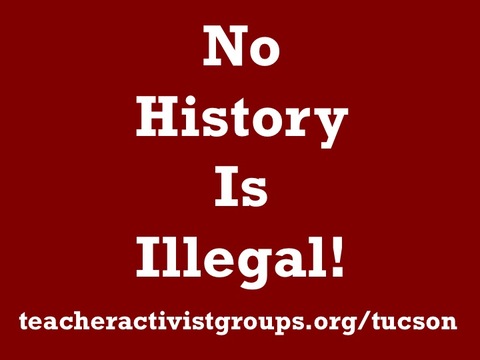 As we wrap up our month-long campaign, No History Is Illegal, we can count more than 11,500 people who visited the campaign website, and nearly 1,500 people across five continents who pledged their support. These include many amazing stories of solidarity, such as:

And, at Knox College in Illinois, students in a Historian’s Workshop opened their class discussion on these issues to invited guests—friends, prospective teachers, and professors—and ended by writing letters to students and teachers in Tucson.

Support for Tucson teachers and students continues to grow. Most recently, the American Educational Research Association (AERA) released a statement on the suspension of Mexican American Studies in Tucson, “…the AERA Council emphasizes the substantial body of research that reveals that such courses improve critical thinking and reduce stereotyping and bias among students. Characterizing the legislation as educationally indefensible, AERA urges the Arizona State Legislature to repeal HB2281.”

Rethinking Schools posted a preview of their Spring editorial, which acknowledges the ridiculousness of banned books but focuses on the heart of the issue, saying, “Many commentators focused on the outrageous act of banning books. But the books were merely collateral damage. The real target was Tucson’s acclaimed Mexican American Studies program, whose elimination had long been a goal of rightwing politicians in Arizona.”

You can also join or support Librotraficantes, the caravan to smuggle banned books into Tucson. This group will be traveling from Houston, Texas to Tucson March 12 to 18 carrying ‘contraband’ books and creating a network of underground libraries.

The blog Banning History is collecting video testimony of people reading passages from the banned books.

We continue to encourage you to tell the story of how you shared the struggle of Tucson in your classroom by writing a testimonial on the No History Is Illegal website. You can also directly support the teachers in Tucson by making a donation to the Save Ethnic Studies legal defense fund.

Thank you for being part of this amazing act of solidarity.