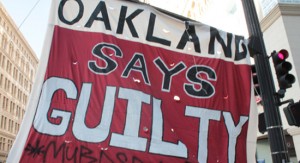 Johannes Mehserle, the former police officer whose murder of a prone, handcuffed Oscar Grant made international news on New Year’s Day 2009, was convicted yesterday for the lesser charge of involuntary manslaughter. Mehserle could serve as few as two years.

What occurred when the jury, which had no Black members, came back with a verdict that seemed to give so little value to the life of Oscar Grant, many Oakland residents were stunned. Still, when it was announced Thursday that the verdict would be read at 4 p.m. Pacific, downtown businesses cleared out early — as if, in a state that made Rodney King a household word, no one really expected Johannes Mehserle to receive anything more than the light sentence he received, and that people would respond.