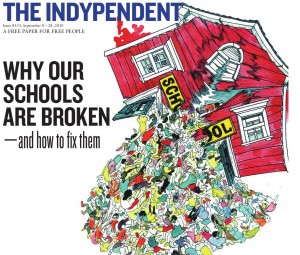 Check out the Indypendent’s latest back to school issue and read about test prep madness, parents in protest against the city’s educational policies and the struggle for educational justice.

Other articles include why teacher unions matter, racial segregation and perspectives from the many education groups in NYC.

Teachers- subscribe to get your class set of this amazing resource. The paper is free, you just pay for shipping. This is an invaluable resource. 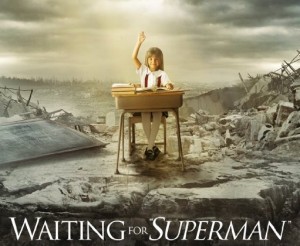 NYCoRE likes this and thinks you should too. Stay tuned for ways to get involved in a counter campaign to this “heartfelt” attack on teachers and teaching.

On September 24, 2010 the film “Waiting for Superman” will open in theaters in New York City and Los Angeles. Soon after, it will open in thousands of theaters across the country. The film is backed by a well-financed, sophisticated media campaign that has the support/ involvement of a variety of organizations.According to those who have previewed the film, “Waiting for Superman” is “very sophisticated,” “emotionally engaging,” “contains powerful stories,” and is “politically convincing to the uninformed.” It has been described as “anti-teacher union,” “anti-public education,” “pro-charter,” “promoting market solutions,” “anti-teacher,” and “promoting the Duncan/Rhee/Klein agenda.” It promotes the view that public education is failing children because of “bad teachers” and their unions and the only solution is to replace them with more charter schools. This is an inaccurate and misleading message about both public schools and charter schools…..